With To The Point staking it’s claim in the underground Hardcore and Metal scene, we naturally needed to evolve and rise to the challenge to represent the realest and hardest in Hip Hop. With all the staleness, copy cats, and trap crap that’s saturating the industry, we’re excited to bring you REAL NY HIP HOP. FTW!

With Tony Slippaz and Skriptkeeper hailing from Queens and Suffolk County, they have been long time friends and have worked together for years. Creating a serious buzz for themselves both individually as industry artists and underground NYC favorites. As a result, they quickly caught notice of the king of the underground himself, Danny Diablo, aka Lord Ezec and began collaborating FTW.

Skriptkeeper from Suffolk NY holding the title of BET’s 106th and Park Freestyle Champion for weeks and was Hot 97’s Summer Jam Lyrical Champion in ’05. Skriptkeeper was also a finalist on Hip Hop Bootcamp.

And not to mention the almighty Danny Diablo. Which name speaks for itself.  For those who are living under a rock. Danny Diablo aka Lord EZEC is infamous in hardcore for being the influential 90’s front man for two of hardcore’s most respected bands, Crown of Thornz and Skarhead. Not to mention a hip hop solo recording artist featured on The Transplants “D.R.E.A.M.”, as well as Danny Boy O’connor, and Shiftee on “Suck On My Gun”. Continuing with the release of street CDs on his own label Ill Roc Records. (Street CD Vol.1 & 2).  In 2005 he recorded “Hardcore For Life” on Travis Barker’s Lasalle Records. In 2007 Danny Diablo’s “Thugcore For Life” was released featuring the Tim Armstrong produced “Living By The Gun”. followed by the genre mash-up record “International Hardcore Superstar.”

Now Danny Diablo’s back in 2016 teaming up with Tony Slippaz and Skriptkeeper to work on this latest project “FTW” (F🖕ck🏻 the World🏻).

A combination of lyrical forces, they’ve been plotting and engineering to unleash a beast upon the world this Summer. It’s properly titled “The World is Fucked”.   Dropping everywhere worldwide on To The Point Records.

We’re kicking things off with a video release party at Red Star Bar in Greenpoint Brooklyn hosted by Danny Diablo and DJ White Owl spinning the hits all night, with the debut video premiere of “Goon Squad” tonight at midnight!

This is a movement you can’t miss. stay on point with it. 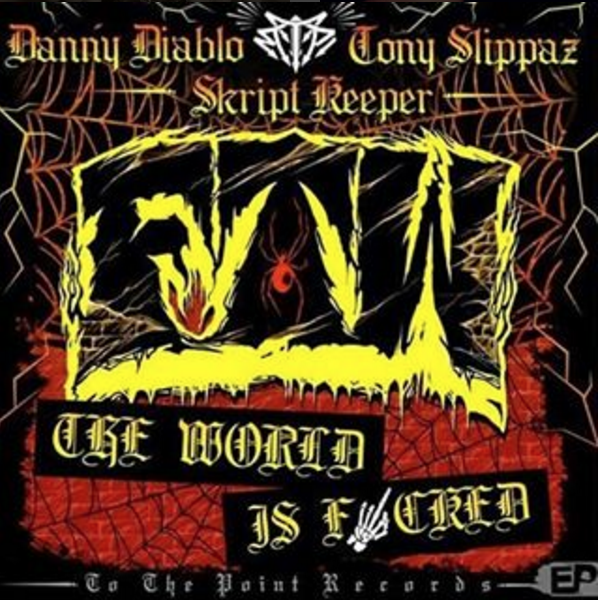